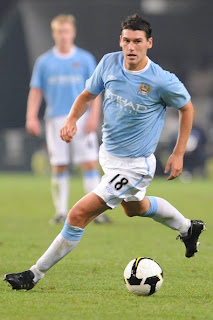 One of the toughest players to rank in a while. My brain is screaming that he should be higher but my instincts demand the exact opposite. He's been high, he's been low, he's been sorta everywhere really.

There are a quite a few things to like about Barry, even if few people seem to. He is physically very good and rarely injured. He is consistent. He is versatile and has functioned in a number of different roles and positions during his career.

It's when thinking about just how exactly does he function that all the doubts I have really start appearing, even when it comes to his main responsibility in recent years, operating the defensive midfield.
I'm just not fully convinced that Barry is a really good defensive midfielder but more of an all round midfielder almost trapped in that role. Yes he works hard and is strong. There is no problem with his positional discipline either. So much so that time and time again you find yourself missing the younger Barry who made great forwards runs playing for Aston Villa.
Then to make that aspect even more confusing, even if it seems he does very little, his offensive numbers for whatever they are worth in this sport are actually really good even at this (defensive) stage of his career. There is definitely contribution from him there, one way or the other, and it's a big part of why my brain wants him higher, and that he is where he is even, for someone I see, maybe wrongly, losing the midfield battles to the opposition (defensive midfield specialists overcoming the allrounder you could say) a little too often to be considered elite.

That Barry is slow and uncreative wouldn't really mean much if I was sure he was very good defensively. That added with his goal and assist tally + versatility would suggest a very high ranking, despite nothing flashy.
For now though he is a complete midfielder putting only some of that completeness to use in a defensive role where he works well defensively and distributes the ball safely, just not as good as the specialists and even though the naked attacking numbers are there (from set pieces?) and that certainly has put him ahead of quite a few of those specialists, it isn't enough to have him up there with the very best.
In the final third, with apologies to his certainly capable left foot, I'm just not seeing quite enough talent coming from him. Not enough to put him ahead of the best defensive midfielders, overcome the defensive deficit so to speak, or the more complete midfielders, which most will be, other than the true elite defensive ones, when we get to the top ranks.

Well I'm still not sure where to rank Barry but I think I've realized one thing that I've subconsciously been holding against him, is an impression (whether right or wrong) of him folding or just being outplayed over the years when up against good opponents.

I have a feeling that a great performance from Barry the next time he squares up against the Manchester United midfielders, could really boost his ranking.
Indsendt af Stefan kl. 02.43