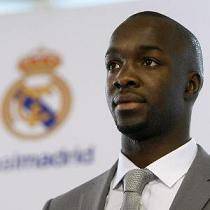 Lass was higher on the list originally but while his team dominated most games he managed to still have an uneven season eventually losing his place to Fernando Gago.

A lot of that was injury related of course but then to turn matters into a whole new kind of worse, just before the World Cup it was announced that Diarra was requiring significant rest dropping out of the France squad (if early reports had not been as serious as they were, in retrospect then perhaps you could call this a blessing in disguise!) due to suffering severe intestinal pain and stomach cramps.

A second test in Madrid revealed that Diarra's injury was due to asthenic syndrome secondary related to sickle-cell anemia, a genetic blood disorder characterized by red blood cells that assume an abnormal, rigid, sickle shape.

Bad enough to raise serious questions about his career. The latest however is that he is training with the rest of the squad preparing for the new season ready to go and in a recent interview, he talks about putting this season behind him and his burning ambition of proving himself as a true Real Madrid player.

When at his best Diarra more than anyone is compared and actually resembles Claudio Makelele in playing style.

Both with the ball, passing and controlling it they look similar and even the way he uses his quickness and small but strong frame to win the ball from an opponent brings back memories of Makelele at his best.

You could say he still lacks some consistency, but for most of last season after being promising for a while, he was very good, then this season was when he was supposed to take the last step as without a doubt one of the best defensive midfielders in the world.
I know my early ranking had him down as one of those, this one as well to a lesser extent, but there are some question marks now and it's not given if in a year he would be ranked better or worse than this.

Hopefully better but most importantly, hopefully with his good health intact.

Real Madrid strengthened and stacked with top players (and Jose Mourinho) are so far, and despite an 0-5 embarresment at the Nou Camp it shows no signs of stopping, even more dominating in La Liga this season.

It's been mostly without Lass Diarra though, who's spot as Xabi Alonso's permanent central midfield partner has been won by the very impressive Khedira.

Mourinho so far has also elected to not rotate the squad at all, sticking game in and game out, with virtually the same starting 11.

That has clearly paid dividends in the form of early chemistry for a lot of new players and new coach (something arguably very much needed to try and keep up with Barcelona) but of course also, some heavy workload for key players and unusually little playing time for some very good players on the bench. Including of course Diarra.

The real test for Mourinho's squad management will come later, not least during the Champions League knockout games where Real Madrid will look to do a lot better than in recent years and at the same time a continuous epic two horse race at home where no letting up can be afforded.
Indsendt af Stefan kl. 10.22