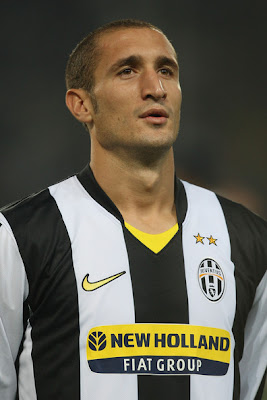 My last remaining reservation when it came to Chiellini's claim as the next excellent Italian defender was his sometimes reckless brutality. At times he seemed intent on proving himself as a hardman rather than a great defender and because of it would unnecessarily commit hard fouls bringing disadvantage to the team in the form of either red cards or freekicks in dangerous places. He was dangerously flirting with entering Materazzi territory instead of breaking into the great defender territory, where his talent so strongly suggested he belonged.

Ironically, this the worst Juventus season in my memory, was the season where that all changed, where you'd see Chiellini cool, calm and collected practice his art, often spotted with a smile on his face and even in great adversity showing no signs of frustration leading to stupidity or to the violence that plagued him earlier in his career.

Now with that gone, only the good remains. As far as tackling goes I'll rate him a little bit below the previous 4 ranked centrebacks but he is still very good.
In direct man marking I also think he is a little bit behind certainly Vidic ( better technically though) but also Carvalho/Ferdinand when at their best, but again he is definitely strong enough in that area as well to make it close.

Where he is ahead of the likes of Vidic, Ferdinand and Terry is speed. As a former left-back he has good pace for a centreback and he uses it to great effect defending greater areas than for an example what Vidic can manage.
Seeing Chiellini at times this season basically being a one man central defender army playing for at least two, was some of the most mind boggling impressive defending I've ever seen.
It should never be like that of course in a team defense that functions, but nonetheless seeing someone in a game at times simultaneously manage defending left back, defensive midfield and both centreback positions was extremely impressive to watch.
Obviously I'm not saying he was in many places at once, that's impossible, but time and time again he was there to cover holes that were appearing all over the place, and with that, showed me at least, that here was the central defender with the best range to his defending out of anyone.

Of course range won't do it alone and if he wasn't very strong, a good tackler, quick with great timing and good in the air, then range can only do so much, but when very gifted at the same time, it does wonders, or least as much wonder as a central defender can do in a game where team defending is much more important than any one individual defending great.

Individually I rate him as the best centreback currently in the world but to get anywhere it's the team that has to defend well, and while a centreback's negative impact concerning defending can still be greater than those in other positions, the positive impact concerning defending can be as great coming from almost any other position. Maybe even indirectly from the forwards who for an example I'd argue had the most negative impact in Chiellini's team, Juventus, defensive failures this season.
Late (fat) Ronaldo at Galacticos Real Madrid is another of my favorite examples and of course late Ronaldinho as well, both for Barcelona and currently for Milan.

It's not as negative as the (maybe not so) hypothetical defender in the back-four who keeps scoring own goals but one rotten apple in any position can create imbalance damaging the team defending and then adjusting to that tactically might just damage the team's ability to score goals, which again, arguably in many ways will make the defending more difficult, which then... well you get the picture... It's just a neverending evil circle affecting winning and losing and in many ways also in there is why I've ranked players the way I have.

Who individually contributes most to a team's chances of winning?
And unless I decided to give tremendous credit to countless of defenders for not being really poor, for not being Frank Sinclair and by default almost causing defeats, that means players in positions contributing more, defending, attacking or both, in more places than deep in your own half which arguably with the speed and skill of players nowadays isn't even that more important to defend, than say certain midfield areas (depending on tactics of course), then these players, at the highest level at least - who the most important players are on lower levels might actually be quite different - judged by me to be doing more than the defenders doing less will of course have to predominantly be ranked higher throughout this list.

And with that, here we have it. The last central defender on the list ranked 77. Had I been more idealistic I could have probably followed through on my ideas even stronger and had everyone much lower - if ranked at all! But it's not all black and white of course and so far the list have been full of players where you could always find some kind of negative justifying being put behind a central defender if at the highest level, but that's over with now and the rest of the list will all be players who I think with their characteristics can contribute more to a team than any current centreback, and the higher we go of course, the less close that will be.

Chiellini remains consistent and is currently in a good looking partnership, club and country, with Leonardo Bonucci, who is a clear improvement over previous partners Leggrotaglie and not least the fading Cannavaro.

This season he also enjoys the luxury of a more well balanced team in midfield, but huge weaknesses at the fullback positions ensure the Juve back-four will still look shaky at times.
Indsendt af Stefan kl. 05.36