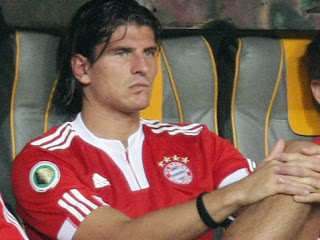 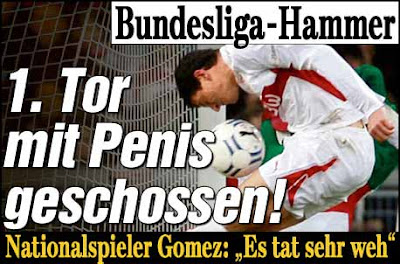 Okay so it really hurt he claims, and that does make sense of course, but a goal is a goal and lately Gomez is in another harmful situation (possibly here hurting his behind in the process) sitting on the bench not able to score the goals he loves so much and which over his still young career he has netted at a fantastic rate.

A year ago it was 24 in 30 league starts (37 in all). Then 23 in 28 across all competitions. In 06/07 there was 14 in 22 and even when still finding his feet in the Bundesliga the year before that, amidst many substitution appearances, it was for what its worth 7 goals in 6 starts.

But here he is at Bayern, their best striker by some margin I still believe, on the bench.

For starters you can only have so many attackers in a lineup and Bayern have two excellent ones in the form of Ribery and Robben both somewhere higher up the list.

Then there were the impressive form of two of my favorites (and I can definitely see why any coach would feel similar!) Olic and Müller who both contribute, as talked about in their writeups of course, in different ways with different things than Gomez does. Then if the coach in connection with all the other players in the lineup, feels that's what makes the team better, then it doesn't really matter if another player isolated on his own is better individually ( not least if those other things are deemed less important on this particular team with their specific players).

Even Klose. Himself with a history sitting on the Bayern bench brings different movement and dynamics (in the form of his remaining pace) to the team than Gomez.
I would though, even if he returns to good form, have a harder time understanding him playing over Gomez than I would Olic or Müller.

Then again if as some reports on and off during the season suggested are correct, that Gomez (Luca Toni style? Maybe not quite but still) have practiced feuding with Van Gaal, then that's not something that will provide the greatest outlook for more starting time.

If he were to get the chance again what Gomez does brings of course is a very impactful around and inside the box presence. He is very strong, good in the air and while at times can look underwhelming still with good and definitely underrated technique. Both when it comes to control and finishing.
I still think a large part of the under appreciation or denial even of any Gomez skill at all come from his high profile failure at Euro 2008 where he just didn't put a foot right.

With great performances in the Bundesliga naturally getting much less attention internationally, those things can haunt a player.

But Gomez from the starts that he actually DID get last season (and in all competitions he did score 19 goals) I thought both when it came to movement other places than in the box (maybe even more pace) and general ball skills as well that he looked better even than at times for Stuttgart during his scoring goals for fun (even using penis) glory days of the previous seasons.

In many ways that's what this good (even if too good according to some) ranking is based on.

Rightly or wrongly I thought he looked very good when I saw him and while as the season progressed getting to see that less and less certainly hasn't boosted his ranking, I'm not willing to dismiss my impression totally on a 25 year old, at his club in competition with excellent players, when I have no reason to suspect he is suddenly a worse player than the free scoring one of a year ago or the one I was very impressed with this season while he was still getting the chance.

Who knows what took Van Gaal so long starting Gomez for Bayern this season.

Klose once again couldn't get any rate of acceptable goalscoring going, considering he's the starting striker for the strongest team in a very attacking league.

Gomez on the other hand, once he got the minutes, predictably, returned to goal scoring machine kind of form.