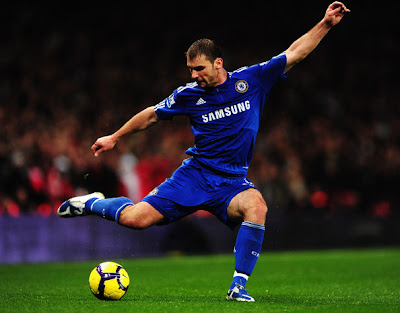 It's possible I was late to the party but for me Ivanovic was one of the major revelations this season. A total beast.

As the season started and Ancelotti was rotating between him and Bosingwa on right-back I was pretty critical cause I thought of Ivanovic as primarily a central defender and Bosingwa as one of the best right-backs in the world. Even if I could see Ivanovic being very good defensively, I always thought Bosingwa was underrated in that part of the game and in no way a liability.

Of course it wasn't long before Bosingwa was out for the season with injury and Ivanovic starting became permanent, and with that, a reality where there was now no way to avoid gradually starting to see, not just this Serb oaf playing out of position over someone I thought very highly of but an excellent right-back in his own right, and not just doing defending mind you, where he added a third defender (actually Cole is no slouch either) able do centre-back type of defending in the backline, but a player who with his athleticism and great team-work was effective going forward as well.

Make no mistake about it, Ivanovic while physically strong like a centre-back, has pace too, and his powerful, often overlapping, runs in the final third throughout this season would have made many good fullbacks proud.

Even his technical ability is pretty good and more than once this season you saw him with power and control beat his man in the opponent half. Either fully to make a run into the penalty area, or more common, simply to deliver one of his surprisingly good crosses.

I actually do think now that Ivanovic is one of the best right-backs in the world and while there are people ranked lower who arguably rivals him as a fullback, he is another player who has received quite the ranking boost because he is a very good central defender as well.

With Carvalho sold to Real Madrid, Alex with injury problems and somehow not yet any real confidence in the youth they were somehow counting on, Ivanovic has been needed a lot in central defense so far in 2010/11.

To take the positives first, I quite like his passing from there, he is also strong in the air and of course has good pace for a centre-back, but not so positively it's also becoming clear that he isn't a great centre-back and far removed, for example, from the class of countryman Vidic.

I also have the impression that when he has been playing right-back so far this season that his impact there have been a lesser one.

Maybe it's the Chelsea attack currently stagnating as a whole after the great start, affecting everyone, or maybe it's opponents actually respecting Ivanovic now, Taking him into a account as a Chelsea weapon that (also) has to be dealt with.

No matter what, it's not looking quite as good for Ivanovic, for Chelsea or on this list.
Indsendt af Stefan kl. 05.30