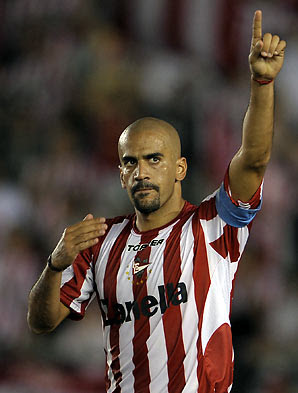 When I first saw that he was an integral part of Diego Maradona's Argentina at 35 years of age I had a difficult time seeing any positives and I'm still very skeptic thinking it's a huge step backwards when considering the superior Argentinians out there, players who are still to come on this list, but to be fair to Veron he is actually playing pretty well.
Likely he is still too high on this list though and something of a reach but when I felt Pablo Aimar had to be included Veron just had to come along too. Otherwise he would feel left out!

As I remember it, back in the day for Sampdoria, his first club in Europe, Veron was quite the attacking midfielder and very dynamic one at that (completely unlike now) making great forward runs and looking very strong while doing it. I remember one of the very first descriptions I read of him in an old Goal magazine was that this guy was like a powerful race track horse with all his running.
Behind that description must have been tireless Serie A fan Kristian Borrel who was the only worthwhile thing about it in and who I just want to add on a further sidenote I will always be grateful to for his massive Serie A previews where he went through the defense, midfield, attack and coaching on every single team. I definitely didn't agree with everything but it was rare (and still is in a language I can understand anyway) to see something so thorough that also offered opinion and ambitiously tried to analyze tactics,coaches and players.

Anyway those early Veron impressions didn't really offer much of a glimpse of any great passing or playmaking coming coming from him but it's possible Sampdoria at the time played very direct mostly counter attacking and that's the reason the game he since became so known for got masqueraded.
Interestingly I think to a lesser extent it could be argued that there were similar circumstances at play years later when he was seen as something of a flop at Manchester United.

At his next club Parma (where he was a key player in wining a back then very strong UEFA Cup. Sometimes arguably stronger than the Champions League) and certainly the following seasons at Eriksson's Lazio (where he was perhaps THE key player in winning the Scudetto) and for the national team at the same period, was where we saw the "real" Veron.
A player with a very good work-rate who was a great distributor in midfield.

I think the best description I can come up with of my impression of him at the time was that due to his running he was always in good position to get the ball and when he got it he would always make some kind of good pass. I think if you compare him to prime Riquelme or Pablo Aimar it wasn't as much in the final third where he would consistently create or dictate, that's what Manchester United was looking for him to do and he could do that some but not enough at a high enough level like those other two and definitely not dribbling at great speed like Pablo Aimar, or anything like that, but conducting possession in midfield, the longer the possession (and from deeper) the better almost, that's where he would excel.

Now when I see him, though he has slowed down some, I still see decent work rate and movement making sure he is an passing option and the passing skills and ball control is obviously still there.
There is just less pace, and there wasn't even that much to begin with, and generally his play just isn't very dynamic. Maybe that wouldn't be a problem if he was still playing from deep in midfield and just covering ground there but from what I've seen his current role for Argentina is very much as an attacking midfielder and he just isn't much of a threat there at all, himself, when space is narrow.

I think it's great in theory that whoever the skill players for Argentina will be up front (of the many still to come on this list only Messi is certain) can have Veron as an ever present wall almost that they can play against and have the ball bounce back, but it does leave them with huge responsibility to make great runs and create almost any dynamic themselves.

Apparently in South America these days Veron does a lot more. He's been South American player of the year twice while in his 30s and I can see he has a pretty good goal scoring record for his club team, but from what I've seen so far on the national team there isn't much more than solid passing coming from him.
No decisive passes or runs in narrow space and I'm not sure that's enough from an attacking central midfielder for a wannabe World Cup contender.

Not helping is that Messi for Maradona's Argentina is more of a second striker operating centrally than he is for Barcelona, paradoxically resulting in fewer goals. For Barcelona Messi has space to create on his own. There are two more forwards and there are dynamic midfielders. For Argentina the midfielder is non dynamic Veron and there is only one more forward. Instead there are a couple of wingers, one of those Di Maria on the left could be a good forward in 3-forward line but on the right (English first division star!) Jonas Gutierrez spends way too much time occupying the space Messi could fill so much better.
Basically the less Messi finds himself playing with his back to the goal, the better. It's when he is facing the goal that virtually anything is possible! Taking away any amount of time Messi is facing the opposition goal just can't be a good thing.
20 something years ago similar was the case with Maradona himself, now here he is messing Messi up, WHY?

Well Argentina's World Cup is almost a chapter for itself.

But Veron all things considered did okay I thought and they could actually have used him as a solid ball distributor to take some pressure off in the games where their complete lack of team defense and balance was exposed by well functioning attacks like Mexico and of course not least Germany.
Indsendt af Stefan kl. 22.35