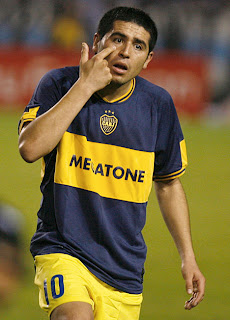 They really don't make them like Riquelme anymore. He is an old school passing maestro number 10 80s style who doesn't do anything when his (and in Riquelme's case I really do mean HIS) team isn't in possession and when they have the ball lots of the play will go through him and his impulses on the given day.

What I do know is that his game relies less on athleticism than almost anyone and even if he's declined in those areas it's not the greatest loss.

I do think it's important that he at least has a work rate meaning good movement when his team is in possession.
When at his best for Villarreal that added a good goalscoring dimension to his game. It wasn't just awesome free kicks and penalties and before their fallout he was like a fish in water (not just making it better) but benefiting from Pelligrini's flexible possession system.

Riquelme is pretty slow, lazy and not strong at all. But he is a superb technician with great passing skills and radar vision to go with it making him one of the best playmakers of his generation and in many ways the last one of his special kind standing.
He was never willing to make any tactical sacrifices, change his role or playing style or try to improve even to fit in with how the game has been changing. A unique player.
Indsendt af Stefan kl. 22.43