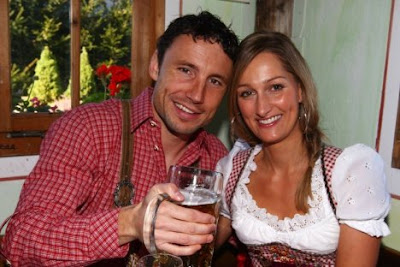 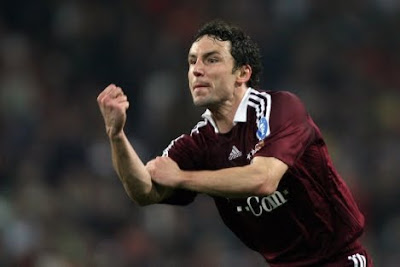 The dirtiest player in the game? Someone who wins very few friends in the heat of battle among opposition players.

Personally I wasn't even aware that Van Bommel was still any good before this season. Like some other Bayern players, his reputation with me at least, had been damaged almost beyond repair by some of the dismal performances I watched from them last season and he wasn't even on the list originally.

Well, enter this season and Bayern now with a great coach, Louis Van Gaal in charge, instead of a rather clueless one in Klinsmann, and slowly but surely improvement in all areas started taking place resulting in a very strong team playing up to its potential.

Now needless to say almost Van Bommel at 33 isn't the player he was in his 20s where on top of having the qualities that he has now, was also efficient going forward and quite the threat with his shooting ability.

Twice he won Dutch player of the year being a major part in 4 PSV championships and along the way even, coached by Hiddink, even went deep in the Champions League then later won the trophy at Barcelona.

That's where the transformation I guess into a primarily defensive midfielder really began. One that is now well complete and where Van Bommel aggressively operate for Bayern.

Now do I think Van Bommel is better as a defensive specialist than the recently ranked Palacios, Song or Toulalan?

No all them are better physically and all that comes with that, which defensively obviously are integral parts of the game, but through his very own evil combination of intelligence (experience really) and controlled aggression right to the limit, or over it whenever he can get away with it, Van Bommel mostly holds his own in those departments. And as an overall player I still like him more.

The hint of a former very good two-way player just still remains, but mostly what sets him apart compared to those mentioned is his range of passing, where with his new central midfield partner Schweinsteiger who can do the same, he can really help control games for Bayern.
Whether it's great decision making in the short passing game or it's effortlessly hitting longer accurate passes from side to side stretching the opponent's team defense. Especially that, with Bayern on the wings having such excellent players as Robben and Ribery that's something extremely valuable coming from the central midfielders.

That was a very long 2009/2010 redemption season for Van Bommel. All the way to the Champions League final then the World Cup for Holland and another great run to the final there.

You can excuse Van Bommel for feeling a bit worn then and he has been missing games this season.

Another thing for Bayern so far has been life without neither Robben or Ribery's wing play due to injuries.

In the original writeup I talked about Van Bommel and Schweinsteiger's control of games through their distribution. Well a big part of that, when the real pressure is created, was often them working towards getting the ball wide. While I rate Müller very highly (as his ranking shows) he is definitely best when his fantastic movement isn't glued to the sideline.

The Bayern central midfielders aren't playmakers however, able to make piercing through balls like an Özil, and without the options out wide, complementing their range of passing, Bayern's sometimes overwhelming possession will lack tempo and be a bit one dimensional. Easier (even for Bundesliga teams) to contain.

There are other factors involved in Bayern collecting a below expectation points tally (an abnormal amount of individual defensive errors doesn't help) in the Bundesliga before the upcoming winter break, but I do think the above has definitely contributed.

Van Bommel who now doubt will welcome the winter break is still Bayern's first choice partner to the excellent Schweinsteiger, but maybe look out for Toni Kroos who has been part of the problem out wide, but who now Van Gaal perhaps sees a diamond in when it comes to central midfield.
Indsendt af Stefan kl. 04.51