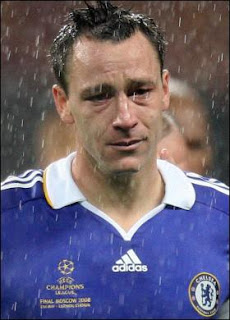 Less gifted than both Carvalho and Ferdinand but starting 129 games the last two seasons overcome that gap and puts him just ahead.
That's just a contribution they cannot match and a tremendously important one to his team.

Terry is near unbeatable in the air and while not quite as excellent, a man-marker or position-wise, as the previously ranked pair, he has great tackling ability serving him very well.

That Terry isn't fast shouldn't be blown out of proportion like it often is, almost no defenders can match the attacking players in that area, and so much of defending by the whole team is geared towards preventing one-on-one races into open space and when those situations do indeed occur it will often be some kind of hole or mistake in the team defending, somewhere causing it.
That Terry is outrun by say Diego Milito isn't as much Terry's fault as its quite simply the natural order of things. How can anyone expect a different result? And it can easily be as much various midfielders jobs to prevent that situation happening as it can be the central defender's.

Finally and I don't know if it is that he has improved in recent years or if I (and everyone else it seems) have simply overlooked it, but I'm actually seeing Terry with some decent control and execution of nice passes these days. It isn't just kicking the ball aimlessly away contrary to what perhaps is his reputation.
Indsendt af Stefan kl. 04.50