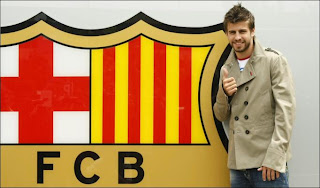 Ranking the Barcelona defenders is pretty hard. The team concedes fewer goals than anyone but most of that of course is through the (ball!) control they have of almost every single match they play.

Their defenders don't even have that much defending to do, or at least less than everyone else, and when you finally do see them actually defend it can easily be them struggling to defend with most of the team caught forward. Or themselves since they push up so high.
As much as that can make them look worse than they actually are, the superb defensive record on paper on the other hand can make them look better.

Pique is big and strong with superb technique. which is all important since a good passing game of course is a must for a Barcelona defender.

I think he is strong man to man but with still a little way to go positionally, however good health and lack of blunders (+ in some ways starting for both the best club and national team in the world) is what seals the deal in making him the top ranked central defender so far!

Well it's still tricky to rank the Barcelona defenders.

I think for a lot of people Pique almost automatically enters a best defender in the world discussion but while both his club and national team have continued their conquering I've somehow become more and more skeptic.

For starters I've become increasingly convinced that over the last year, not least in La Liga and Champions League including right now, that his partner Puyol has been the better defender of the two. No he is not as elegant looking but by some way I think stronger one-on-one and he makes less marking blunders too. Whether it's on set pieces or the rare times Barcelona, or Spain for that matter, are under any pressure.

Actually I can't rule out much of my increasingly clear impression has been from seeing so much of Spain where I didn't think Pique looked very elite when under pressure.

Since we're comparing him with the best, I also have serious doubts, if we were to theoretically switch that he could do the kind of elite defensive job that you see the likes of Vidic and Ferdinand do for his former team Manchester United.

That's being very negative of course but I just don't think, that for the time being, remember he may not even be at his best yet and can still improve, that he should be considered one of the very best defenders in the world.

On the other hand things like his football intelligence, the timing and the skill that makes him so comfortable playing very high up the pitch without and not least with the ball, making him a contributor even, on the best team in the World, all that shouldn't be ignored and it virtually guarantees him a pretty good ranking. It just shouldn't overshadow that when it comes to what happens to be actual defending for all other teams in the world, that there are better defenders out there than Pique.
Indsendt af Stefan kl. 22.53