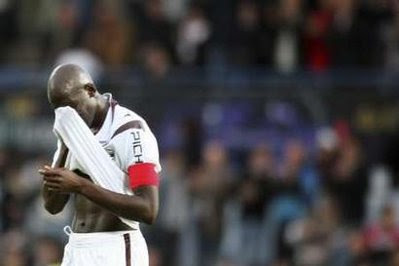 It's tempting to write a lot about Bordeaux, the soon to be not champions of France anymore (edit: actually Marseille clinched the title last night and my first thought is regretting lumping Lucho Gonzales with the other Argie playmakers thereby hurting his ranking). The good and the bad, the rise and the fall - since they've been one of the most interesting teams the last couple of years, but I'll save it for when I get to their highest ranked players which both the rise and the fall have a lot more to do with than Diarra.

Alou Diarra while also able in central defense (earning him the usual bonus points on this list) is primarily a very good defensive midfielder.
Athletic with great stamina he rarely misses a beat when it comes to defensive assignments, whether it's applying pressure or covering his position, and I'm guessing it has to do with his central defender ability that he is also one of the best midfielders at helping out the defenders in the box itself when necessary.

With the ball, and I could be wrong here since it's possible he was never bad at all, it's my impression that he has improved quite a bit in recent years, and passing or controlling the ball, where he can also put his athletic ability to use meaning great balance, aren't weaknesses anymore.

With likely the biggest stars for Bordeaux. including coach Blanc, jumping sinking ship it will be interesting to see if Diarra stays. I think Bordeaux if they can manage to keep Gourcuff still has a great centerpiece to build from and add needed depth around, but if they aren't even making the Champions League, and it doesn't look like they will after leading most of the year, then hanging on to anyone good will be very tough.

The Bordeaux stars and coach did of course jump ship but it hasn't quite sunk yet.

They still have some solid players, not least Diarra himself, and remain competitive in what once again looks like an evenly matched Ligue 1.
Indsendt af Stefan kl. 02.27