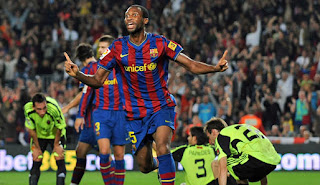 For quite a few years known as very good defensive midfielder. That alone being something which would have earned him a decent ranking on my list.

But ignoring whether I was late to the Keita party or not, helped along by all that tika-taka Barca stuff, this season he has gone up quite a lot in my estimation with some excellent two-way midfield displays.

It makes sense that he is able to do it. He has great stamina, is strong with balance and has always been good on a technical level as well whether it's passing or control. He also has the intelligence to know where to be. That's mostly been when defending, but that he now makes well timed runs forward too makes sense then and if Barcelona didn't happen to spend all their time in the opponent's half you could even refer to him as box-to-box!

In a way this progress has been aided by other people's problems.

Henry completely collapsed meaning Iniesta (he himself often struggling or out with poor form) got games as left-forward rather than left-central midfielder (thankfully for Barca there was also the emergence of Pedro) so there were holes to fill right there left central in midfield, -rather than central itself where Busquets now was breaking through- and Keita proved to be just the right man for the job being a more dynamic player than for an example another (not so) potential contender, Yaya Toure, who off-ball can't move into open space out wide like the quicker Keita.

Basically here is a complete midfield two-way player. Those could very well be my favorites. I guess rest of the list must be (better be!) very special...

Not much to add here other than despite Keita hardly putting a foot wrong lately for Barcelona, playing time still isn't automatic when Iniesta is back playing as one of the best in the world and one of the best strikers around David Villa has joined occupying the other position where Iniesta could be played.
Indsendt af Stefan kl. 10.49