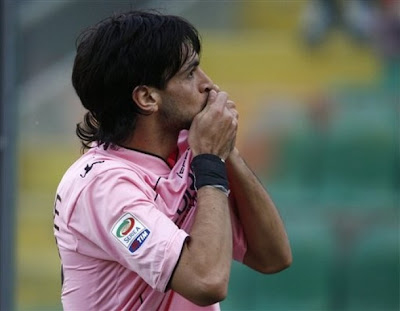 The rare extremely talented attacking Argentinian player who IS NOT getting the new Maradona tag thrown at him or even the latest disturbing trend, the new Messi tag. No instead, and I'm not really sure if it's any better, Pastore is often referred to as the new Kaka!

They're similar in build and one can hope it's only a matter of time before Pastore starts using that better and adds more physical elements to his play. The potential is certainly there and there really is no reason to play like you're 170 when you're actually just short of 190!

More good news for Pastore is that when it comes to passing and general creativity he is actually showing things that Kaka mostly doesn't have in his game.
From standing still positions he can actually make plays and shows many signs of good vision.

Standing still is also a problem though. To become a great player he needs more tempo in his game and has to make better runs both with and without the ball. He will probably never be the fastest of guys and it's not realistic to expect that he can somehow add the burst of speed that a big guy like Kaka somehow has (or had uh oh) but simply by becoming stronger and get better balance, I think could do wonders if added to his extraordinary technical skills.

In many ways it's extremely impressive what he can do standing still while under pressure and again it's the size/skill combination that does it but it's when he hopefully starts doing it more while on the move that he'll become a great player.

Pastore was very good in the second half of last season and also went to the World Cup for Maradona where (since he was in the squad in the first place) he should arguably have seen more playing time.

This season also started really well for Pastore and he showed masterful playmaking creating for others not least some impressive goals for himself.

Recently there have been something of a down-period though. One highlighting I think, that currently for Pastore there is hardly any middleground at all between the sublime and the terrible.

Needs to become more consistent with his incredible gifts and also improve clear weaknesses like work-rate and teamwork.

Any sign of any improvements of the above could see him rise up the list very quickly.
Indsendt af Stefan kl. 22.29