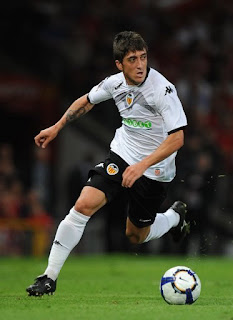 25 year old Pablo actually had his breakthrough a couple of seasons ago for Getafe and was even a contender for Spain's EURO 2008 squad, but following that when he came back to Valencia last season, where he had originally been a youth product, the right wing was still occupied by (mostly former) star Joaquin and Pablo saw limited playing time.

This season however Pablo impressively has managed to reverse those roles and it's him who is the first choice right winger at Valencia and in the process even winning a few of those hotly contested Spain caps.

Pablo is in many ways a typical wing, who unlike for an example even more talented teammates Juan Mata and not least David Silva, it is hard to see really excel more central in tighter space.
While he is a good dribbler he is not David Silva good and his pace is best used when there is space to exploit on the wing. He is far from a Theo Walcott though and is a much more complete player with plenty of excellent technical skills to use whenever he gets the ball. His first touch especially is exquisite.

Without the ball he is actually a hard working player who can pull his weight defensively, really valuably for a skillful winger I think, and that little bit of more robustness in his game plus the seemingly very common theme for Spanish skill players of very good team work, make him for the time being more complete than his younger maybe even more talented winger rivals, and is what has him ahead of the pack so far.

My one concern about him would be consistency. He started this season very well and I was ready to place him even higher but being very good every single game has lately turned into something like being good every other game and with some really bad performances also thrown in, actually opening a little door for some more playing time for Joaquin.

Yeah there is a little bit of a consistency issue here but in positive news I was wrong about him only being effective on the wing. He is pretty good when finding himself central too and on top of that has also shown good things on the left.

Less good news for Pablo is that Valencia replaced their two biggest stars Silva and Villa with a lot of depth. Depth including many players pretty close when it comes overall quality. For coach Emery, who already seemed rotation-friendly, that's just way too much to ever resist, and both in midfield and attack, game in and game out, not a lot, if any, starting places are guaranteed.

Then there is good old Joaquin. Pablo's most direct rival. Maybe losing his place early last season to Pablo was the wakeup call that Joaquin needed, cause I think not soon after, and ever since basically, that he has been playing his best football, dare I say, since his heyday many years ago now for Betis.
Indsendt af Stefan kl. 02.09