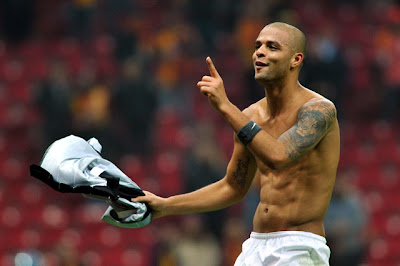 Not much to add here other than Galatasaray did indeed win the championship but Melo's future is still up in the air. Juventus and Galatasaray has failed to agree on a price for several months now and modest bids (by their standards) have also been rejected from Russian clubs.

Melo is such a big hit in Galatasaray at the moment, where he is on loan from Juventus, that he has even gotten the club-lion tattoed on his arm (see spoiler for evidence) which no doubt has helped endear him to the passionate fans there even further.

They had a disastrous season last year finishing 8th in the table but now with the help of not least Melo (but actually Johan Elmander as well, who once again was excruciatingly close to making the list) they're on their way to winning the championship.

He is still one of my least favorite players for all the meltdowns he had for Juventus, and of course there is his most famous meltdown during the World Cup where he was a big factor sending his own country home, knocked out by the Dutch.

For now though, Turkey seems to be a great fit. He will likely be the best player on the pitch most of the time, there is no doubt he is a midfielder who has just about all the tools, technical and physical, and in a very passionate environment his fiery temper fits right in.
It's even possible that, say the one level, that he is basically above everyone else, provides him with sort of a safe margin for the eventual meltdowns not to overshadow the level he is otherwise performing at.

I'll be shocked if Brazil will ever put themselves in a position where they'll depend on him again. I don't think Juventus will either (there is a €13 million buyout clause in his loan deal) or any other big club in one of the major leagues for that matter, but like he has shown previously in places under slightly less scrutiny, Almeria, Fiorentina, Melo can be a very good midfielder when his aggressiveness has some margin for error. For Galatasaray, with their legions of fans extremely upset with their players after last season, it's probably something that they love and I could easily see him, should he stay, become something of a club legend there.

Good for him then.

Surely a current starting central midfielder for mighty Brazil belongs on this list?

Felipe Melo is a great physical talent who can first and foremost help his team by making good defensive contributions but who also has the talent to participate on the attacking front, not so much with passing, where this season for Juventus his decision making has looked painful, but through powerful runs complementing the attacking players.

Before the current Juventus fiasco he enjoyed good years in Spain for smaller sides proving himself worthy of bigger things and last season he had a breakthrough season for Fiorentina where he was an important player in securing Champions League qualification and where, despite his current awfulness, it can be argued that his physical presence in midfield is missed.

Fiorentina have, despite plenty of talent and being a very good technical side, been losing more midfield battles this season than they did the last.

It's clear to me that for Dunga's Brazil and Prandelli's Fiorentina, Melo has done great in well defined roles suiting his strengths. For Juventus under inexperienced Ciro Ferrara he found himself in a situation where nothing was working for him or the team.

For Brazil and Fiorentina he looked like a player worthy of a higher placing. For Juventus he looks like someone who shouldn't even be on the list.
Indsendt af Stefan kl. 21.57