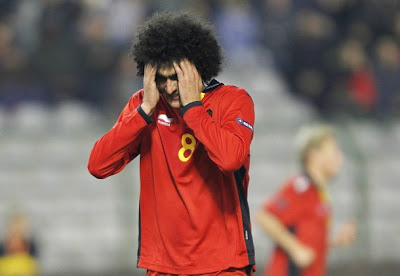 The most expensive Belgium player of all time and Everton's highest purchase of all time as well, unfortunately hasn't had a great start to the season and that has affected his ranking some.

However with how good he was last season, a key contributor to Everton's impressive repeat 5th place in the league, I expect him to perform much better, sooner rather than later.

Fellaini is something increasingly rare these days, a tremendous box to box player. He defends. He attacks. From one end to the other. He has great stamina and can really put it to use.

Then there is his his height which makes him effective in the air. Something always useful whether in his own team's box or the opponent's, where he has shown himself to be a good goalscoring threat.

When it comes to passing he is not as impressive as some of the midfielders already listed and it's possible his ball control could improve as well, but make no mistake about it, with his size, despite looking skinny he does have great balance which of course really helps.

He is someone potentially commanding football games but I do think he could improve his defensive discipline. Work hard is one thing, needlessly flying around in tackles is another and he'd well adviced to put that great energy into great positional play moreso than into reckless tackles.

If he can improve/add even some of those elements to his impressive box to box play he will have an excellent case for a much much higher placing.

Fellaini followed up his rather modest ranking with some fantastic performances contributing to Everton's superb second half of 2009/2010 that was build on what was one of the best midfields in the league.

This season though has been yet another slow start for them and with even the Everton midfield spending good parts of the season now missing pieces making up for missing pieces elsewhere is a lot more difficult. Not helping is better competition around them and rather than another giant upswing, continued up and down results look the more likely.

Then there is Fellaini who hasn't helped neither himself or the club with injuries and suspensions.

The base is definitely in place with his tremendous box to box play but he can still improve both technically and tactically.
Indsendt af Stefan kl. 23.39