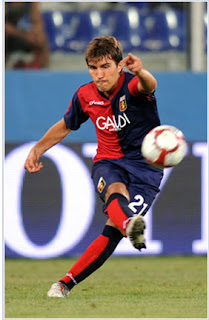 A strong tactical player who has managed to fit into Gasperini's demanding system at Genoa very well with solid two way play.
When that is defending he is a hard working player and a good tackler and when it's in possession he is good playmaker with considerable passing skills, especially from deeper on the pitch, able to fluently spread the play. Not least benefiting Genoa's always forward storming "wings".

At 24 after starting out at Zaragoza he has been a regular starter at a high level since his teen years and is already closing in on 200 league games. That experience shows with his usually good decision making.
Finally he is also something of set piece specialist able to create goals from there. For himself or for others.

It will be interesting to follow his career from here on out. His ballcontrol probably isn't great enough to be a prominent midfielder for a top Spanish side or their national team for that matter. but even though the competition is absurd I don't think I'll entirely rule out him eventually getting a chance as a defensive midfielder.
Certainly someone like the excellent Marco Senna at 33 now isn't getting younger so in not too long there will be one more squad place available there.
Maybe Zapater eventually at least can come into consideration. He wouldn't be undeserving.
Indsendt af Stefan kl. 20.40