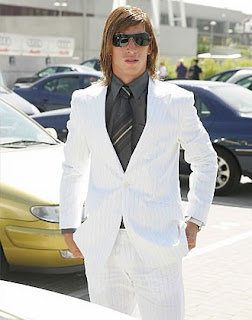 Too high? Or maybe way too low even?

I can say that Ramos more than most when performing the impossible job of putting all these players in some kind of respectable order has enjoyed more of a roller-coaster ride than most.
From pretty high to sort of in the middle of things, THEN jumping back up to a very high ranking, but now here the poor man is, near the very bottom..
But at least he made the list! That's worth something!
Like minded attacking spirits like Fabio Grosso or Glen Johnson did not!

What speaks in Ramos favor is that when it comes to contributing to attack he has skills so good that they're right up there with the very best at his position. The flip side then of course being that he can be pretty awful at defending. Not just in the rare instances when he is actually in position mano-a-mano, but much worse all the times when poor discipline and Ramos way out of position creates unbalance for his team, so bad it often means letting in goals.
In the case of Ramos some kind of precise + - assessment of Ramos value, goals for and against, would definitely be welcome when deciding his ranking compared to others.
For Spain, a team in superb balance in recent years, I think overall you have to say that his contribution is mostly a positive thing. I suspect the same would be the case if he played for the current Barcelona or even his former team Sevilla, but in the end a lingering suspicion of him actually having hurt, more than helped, Real Madrid in recent years, is what keeps him this low.

When your team takes a drastic measure like removing a player from a position where he clearly is better suited on to somewhere where he just isn't very good, in this case central defense, that is a pretty alarming sign actually going as far as to suggest that we here have a player unwilling to make tactical adjustments for the team's benefit!
That in itself sounds almost crazy but why else remove him from somewhere where he could do so much good if it isn't that he is doing very bad, to the team!

Ramos makes one of the biggest leaps up the list. The erratic defending has since the above was written been more of a rarity and both for country and club he has been an asset with his athleticism and great technical skill.
Indsendt af Stefan kl. 20.45