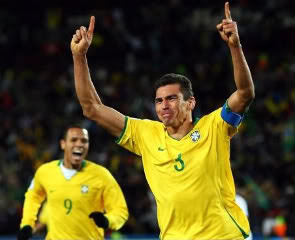 For years and years a very good player not least known for his ability to go forward.
He has great technique, whether it's controlling the ball or passing it out of the defensive ranks and he is also great in the air and strong man to man facing an attacker.

He also has this great desire to win I've noticed and always plays with extreme intensity.

Now, when rating players that's probably very overrated usually, but I feel like mentioning it since Brazilians often have a reputation for exactly the opposite. You know, they're so lazy!

But all in all that sounds like pretty much the perfect defender huh? Well unfortunately Lucio has become painfully slow. Not that he was very fast, at least not on the first meters, to begin with, but he is much slower now! And when you combine that with his not exactly famous ability for spot on safety first positioning you have a player who at times can actually be something of a liability.

However the key will obviously be to adjust, position himself much more carefully, and by the way I'm sure Mourinho will "help" him with that, and he will still be a good defender and one who with all his technical ability and shear strenght, is fully worthy of a place on this list!

Mourinho did indeed help him with that. For much of Inter's all conquering 2009/2010 season a deep defensive line was employed and Lucio's painful looking slowness was rarely exposed.

Lucio will make a big jump up the list. Even if my opinion of his internal ranking among the best central defenders haven't changed drastically, he has now been at such a high level for over a year that I'm elevating him to that not easily defined level where I believe only the very best defenders provide their teams with tremendous value. With animal strength, leadership
and experience that I clearly was underrating, he has been cementing his place among the best defenders in the world.

Even with - what looks like a higher line from new Inter coach Benitez - he is also one of the few experienced Inter players who hasn't really seen his performance drop so far in 2010/2011.
Indsendt af Stefan kl. 20.52