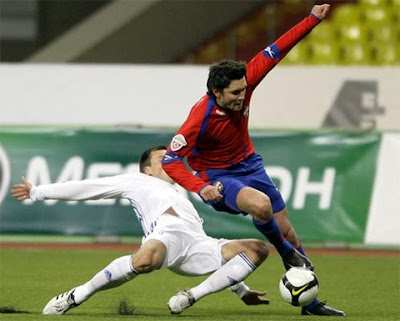 With injuries in the Chelsea midfield, Zhirkov is so far seeing more playing time this season.

What I don't like currently is his work with one of the best players of last season Florent Malouda.

Them playing together seems to have resulted in Malouda spending a lot more time central than last season, and in my mind, despite some early goalscoring, diminishing his value to the team both forward and defensively.

I can't blame Zhirkov for this of course, who does have his moments, but who also shows signs of still not being the best fit, neither for Chelsea or in the league in general.

A pretty good utility man for a top team though.

Unfortunately as I write this Zhirkov hasn't had any chance to really do anything for his new team Chelsea.

This is something that hasn't helped his ranking.

For the Russian national team and from the occasional look at him for CSKA in Europe though, he has shown himself to be an skilled technical player who with consistent raids down the left wing could make life complicated for opposing defenses and create goal scoring chances for his team.

This could be done with dribbling, crossing or just by being talented enough to be a key part in often breathtaking combinations with skilled teammates.

Overall I thought Zhirkov was a peculiar signing by Chelsea. On the one hand their leftback depth behind Ashley Cole is a little suspect but on the other hand he seems way too good to be just that, a backup.

Zhirkov is also to an extreme degree an all out attacking back who is below par defensively and really much more someone resembling a winger.
So you could say then, that's what they did, they bought him as a winger?

In their midfield diamond there is the left central midfielder spot. Where both Malouda and Frank Lampard can do very well while it's a little unclear to me what exactly Zhirkov could do.
It does involve not insignificant defensive duties, nothing new for someone sometimes playing fullback of course, but with a lot of action for that position more central, I wonder what he could do there. He is not exactly a player you'd feel confident in winning physical midfield battles or even holding his own there.

Another option which we could be seeing, once among others Didier Drogba, is off to the African Nations Cup, would be just Nicolas Anelka up front and an extra midfielder then playing instead of Drogba.
That would make room for Lampard in a central midfield attacking role and Zhirkov could play as the left-wing fighting/rotating the spot "just" with Malouda (interestingly with a new 4 year extension) as his main competition.
And of course this could be an option whenever one of Anelka/Drogba wouldn't be available.

All in all it's definitely premature to call Zhirkov the next Alexey Smertin at the club. Smertin who barely played in 3 years at the club. Arguably Zhirkov is a lot better anyway, but it does look like things won't be easy and it definitely hasn't been a great start for him.