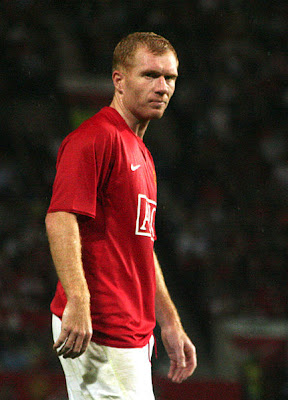 35 years old now and obviously not going... Quite as strong.

When he first came up, if anyone remember, he was actually a striker but that was relatively short lived and he quickly became a very good attacking midfielder and then at some point gradually developed into a superb all around midfielder contributing effectively both to attack and defense, and doing it day in and day out.

That I think is the biggest difference from now and to then. Then being when he was one of the very best in the world. Say at least 100 places better than this.
He does still have those games where he will do all the things he is so good at and do it almost as good as ever, but it's not every game anymore, in fact it can be pretty far between sometimes. Too far between. There just isn't the same consistency.
If I think that Cahill has slowed down then I know that Paul Scholes has. But of course when it comes to quality he has something of a head start over most, hence him still being ranked ahead of a lot of very good players.

Scholes is a very good passer, probably underrated over the years when it comes to that, short or long and very direct, established attack or in transition, Scholes can deliver.
Especially when keeping the pressure on an opponent like Manchester United have done time and time again in the Ferguson era, Scholes has been a key player in forcing and forcing (and forcing!) the tempo, contributing through great work both with and without the ball, into reaching a final frenzy where eventually the poor opponents just could not keep up anymore and succumb. Usually by some time in the final minutes with United grabbing a late winner or equalizer...
Over the years I think, the higher the tempo the better the performance from Scholes. Dynamic runs, booming shots on goal, quick turns with the ball, crunching tackles and direct passing.
Scholes could do all those things very well even when the tempo was high (on the flip-side when it was not so high, like occasionaly in Europe, what most would stand out sometimes from Scholes would be those trademark dumb tackles).
But even if now as a veteran he can only bring that "A -game" some of the time it's still enough to earn him a place on the list

He has done kind of a curious reverse with fellow United legend Giggs. Last season it was Giggs who put in some key excellent performances lifting the team but this season it has definitely been Scholes who at times has looked invaluable in midfield controlling the game with his experience and great passing.
Indsendt af Stefan kl. 00.10