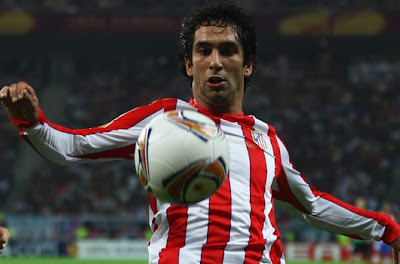 A solid first season from Arda Turan, in his long awaited (by me at least) move out of Turkey to one of the major leagues and currently while it's still early days in the follow-up season for Atletico, with not least Diego gone, and overall less quality attackers competing for minutes, he looks even better with a bigger role as the most creative and skilled attacking midfielder/winger on the team.

Arda Turan has excellent close control and is at his best in the difficult but dangerous smaller spaces having moved or simply on the move inside from whichever wing was his starting point. He is maybe not the fastest over many meters but is skilled enough to still be a handful one-on-one with his dribbling and off the ball he is a clever mover into scoring positions where he is a proven finisher. Something I expect him to show more in his second season.

Under demanding coach Diego Simeone I've also been impressed with Turan's teamwork. He makes the right decisions in what is usually a very transition-minded Atletico attack and without the ball he works very hard defensively getting into the right positions and even when it's called for, proving himself as underrated ball-winner, with his 3.4 per game 2011/12 good enough for 17th in the league.

A difficult player to rank since I don't see him very often.

He is probably the most talented player coming out of Turkey since Emre Belözoğlu.

Emre who after an up and down time abroad now is back in Turkey, and who a little surprisingly is still only 29.

Emre seems to have been around forever but right now I would say I have even less of an idea of how he is doing than Arda Turan, and therefore perhaps mistakenly didn't even consider him for the list.
At EURO 2008 Emre unfortunately got injured in the opening game and instead it was Arda who shined and also Arda who makes the list!

For years and years heralded as one of Europe's prime talents, Arda Turan is now 22, captain of Galatasaray, has 34 caps for his country and is already quite an experienced player.

He has very good technical ability. Dribbling, shooting and passing and creates goals for himself and for teammates. He is also comfortable on either wing, as well as playing up front working with a striker.
Something like his work-rate I have to admit I'm not really sure of so I can't say whether that's a strength or weakness of his, but if I was to point to something of the latter I would say his athletic ability doesn't seem to be all that great. Neither when it comes to strength or real speed, and that's what keeps him behind the next ranked player and others to yet to come. And the difference in level of competition that he faces.
Hopefully like Emre before him, we'll see Arda in one of the top leagues in not too many years.
Indsendt af Stefan kl. 00.23