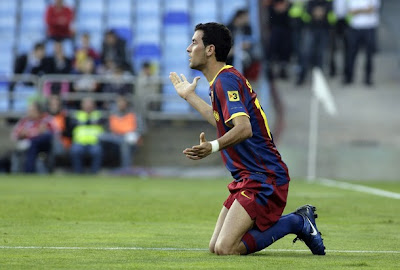 The first one of those (midfielders that Mikel finds himself behind ) is young Barcelona player Sergio Busquets.

His father was a not very good goalkeeper and just a few months ago I would have been inclined to put a similar not very good stamp on Busquets.

Not that he wasn't talented but he did look out of place and too many levels below what was surrounding him on the Barca midfield. Quite simply he looked like he still had a long way to go.

Enter this season and I see he has improved exactly what I see someone like Mikel is lacking.
That very good passing ability. One touch passing too. Long AND short. Some actual deep lying playmaker ability.

And with that already blending in much better than he did last season. It's a really quick, really drastic improvement I think.
Now it's of course very possible that the technical ability was already in place. Last season too. And it's just the added experience we're now seeing the results of. That coming up from the youth team he is now more comfortable at the highest level where you have less time on the ball.
Either way, whether it's technical or mental, we are seeing it now in full flow, and how far he will eventually go will now depend on how good he becomes physically and defensively where of course right now he is nowhere near someone like Mikel.
He has good size though so really you would think everything is in place for him to become one of the best midfielders in the world.

Well the above seems like almost a lifetime ago now.

Busquets passing ability alone, the one touch delightful one up the middle being the most impressive, that alone almost should have secured him a better ranking.

Physically he has also become very strong very quickly and then there are his almost Mascherano like defensive/spoiler instincts that especially for a team as attacking and high standing as Barcelona can be very valuable.

Would he have what it takes as a defensive midfielder on a more ordinary team under all the pressure Barca is never under? I have my doubts, but then again, in a situation like that he might just become the best ball distributor on that team.

Naturally he makes a huge jump up the list and the only thing in my mind still holding him back somewhat are, relatively speaking, limitations in the opponent final third.

For much more on Busquets (not least vs Mascherano) go here.
Indsendt af Stefan kl. 21.17