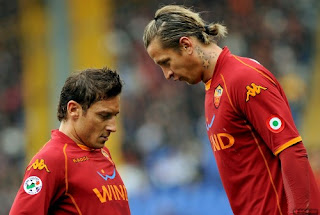 For many years now Mexes has been one of the most talented central defenders in the world.

When it comes to natural ability he pretty much has it all.
He is very athletic and good technically with nice ball control and a vision still intact from his earlier days playing as a sweeper.

I will say that some years ago he wasn't overly strong, if you compare him to some of his rivals at this position, but he has improved on that and these days has become quite muscular!

He also has very good tackling ability and is pretty strong in the air as well.

I also think that he has some of the best defensive instincts of defenders outside people like the three Cs (Cannavaro, Carvalho and Cordoba) and when you combine that with his great agility you have someone who can look more impressive than almost any other central defender when he is on his game.

Yet here he is ranked just inside the top 200 with many (despite my reservations about the position) central defenders ranked ahead of him?

Well as questionable as I find that he hasn't ever been getting a better run for the French national team and as strange it looks when new Roma coach Claudio Ranieri at times has picked (non ranked) Nicholas Burdisso over him, Mexes does have some serious question marks and they're the exactly kind that coaches (forever scared to lose their jobs and with good reason I might add) hate to deal with the most.

Mexes will gamble sometimes. He will lose focus sometimes, and overall I think he is one of those players (warning: rambling trying to make sense of the mystery that is Mexes, coming right up), who when he is good he is very good and when he is bad he is very bad...

That's somewhat of a cliché and it's not quite that black and white or he wouldn't even have a job. As a defender with the simple description of "a job to defend" you just can't afford to be very bad whenever you're not good, but I think it's definitely something that works against him in the minds of coaches when goals against often is a situation where there at least is an explainable reason why the goal wasn't prevented, but in cases that happens to involve Mexes sometimes, with all his god given ability, there really can't be found any good reason why the goal wasn't prevented, and I think that can leave some coaches puzzled, a bit scared maybe, and instead they go for players less enigmatic, more easy to figure out, what in fact they can and not least, WILL do. With Mexes sometimes you just can't be sure.

Now for a whole bunch of attacking players that's a normal thing and with all the variables involved part of the job risk almost, but for a defender with their rather simple task, it's really more rare and not a great thing either.
And that's why for all his great ability that he is ranked where he is.

As time have passed Ranieri looks more and more justified in preferring the Burdisso/Juan partnership.

Mexes still gets starts but I think it's fair to say that the very good defensive displays have become rarer, making the mistakes even harder to live with.

After France's disaster World Cup, Mexes, one of the players always overlooked by Domenech, looked to have a fresh chance with new coach Laurent Blanc. However by now he already seems to have been passed by quite a few of the impressive looking young defenders.

They, and Burdisso for that matter, right now looks to have a better chance being included in the 300.