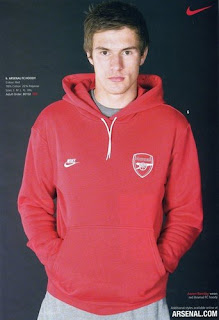 No I haven't seen a lot of him but I'm confident that what I've seen is good enough.

Actually having seen him so little is probably what stops me from putting him even higher!
I'm being a little (too) careful. This is after all a player who is yet to play a whole lot on the highest level.
Sure, I suppose there is a chance that I'm overrating him. That it's ALL TOO SOON.
But what I seriously think I've seen would fully justify including him. Just because it's so rare and so few players got it. Ramsey he's got it!

He has that superb vision and playmaking ability that you only see from very few players and there is great technique too.

Ability, and this is where almost every talent of this type fails/develops into something else in the current game, on a high enough level to survive, to thrive in a climate of tight opposition team defense.

In fact on this whole list you only see it from a very small handful of players so what I think we have with Ramsey is a truly unique talent and possibly the most interesting talent to come out of the UK since Joe Cole (someone like Rooney was a bigger talent but of a nature that at least at the time was less interesting).
AND I do think Ramsey's playmaking ability is a level above what Joe Cole's was and the sick thing is, his technique is at least comparable too!

Even if somehow everything else about him is way below average I'd say that it's okay to include him here.

But let's take a look at some of the other things. Something like how good his movement is I'm not sure of yet and then there is his whole physical ability where there easily could be some way to go.
At least when he is on a team like Arsenal where coincidentally exactly the things Ramsey could bring, that some teams would die for him to bring, on his team IS one of those small handful of unique players who also just happens to be one of the best in the world, AT bringing those things.

I really do have a feeling that Ramsey would start on most teams right now and it's really only a team who has someone like Fabregas already who can afford to hold such a gifted player back a little and instead fill the midfield around the big star with more primarely physically talented players.

Players who I might add arguably to some extent has been underachieving quite a bit, and I think Wenger's recent comments about how it's getting more and more difficult not to play Ramsey, is an indication that physically he is getting there too. And I hope so! Cause he will really need to.

With both him and Fabregas playing, even with such a team likely dominating possession, his workrate would have to be very high and he would have to be able to defend his midfield position reasonable well. Whether that would be putting on high pressure on the ball holder Barca style or tracking back transforming the 4-3-3 to more defensive formations when not in possession.

And last but not least here is an interesting article on him that I found:

When Cardiff City striker Jay Bothroyd was an 18-year-old coming through the youth system at Arsenal, his reaction to being substituted in the final of the Premier League Youth Cup immediately cost him his future at the club. He pulled off his shirt and tossed it scornfully at the coaches in the dugout. He was, literally, sent to Coventry, to restart his career.

In the hotly competitive world of youth football, where the most promising players are hunted by a pack of ­ravenous agents, scouts, and managers, it is rare to find the perfect combination of talent and temperament. Terry Burton, Cardiff's assistant manager, remembers the moment he clapped eyes on a boy called Aaron Ramsey, who immediately impressed on both counts.

"He had just left school and was only two weeks into his career and we drafted him into the team for a friendly at Merthyr Tydfil. He was excellent. He had this maturity and vision above his years." Burton got straight on the phone to the manager, Dave Jones, and told him Ramsey had to be included in the first-team squad for their pre-season trip to Portugal. The boy never looked back. His first full season, which began at the age of 16, ended with an appearance in the FA Cup final last May. "In a very short space of time he added to the small list of folk heroes at Cardiff," Burton adds. "Everyone loves their own, don't they?"

He was the one to tip off Arsène Wenger about this special kid at Ninian Park. Burton's connections go back to his time as an apprentice at Highbury, where he went on to coach and help bring through players such as Tony Adams. "I have been 20 years away from the Arsenal and I never really knocked on the door to recommend someone," he says. "But I did with Aaron. That's how impressive his qualities are.

"I spoke to Arsène just before they signed him. I was sitting with him in his office at the training ground and said: 'I'd really like to find something negative to say, but I can't.'" The worst he could come up with was that he was exceptionally quiet – ­surprisingly so for a lad nicknamed Rambo who wrote on his social networking ­webpage that he was scared of "nuffin".

As Burton explains: "Having come across a lot of London boys who obviously have a ­different type of personality, you didn't really know Aaron was about the place. Not on the pitch, though. As a character, that's where he comes to life. That's the best way, really."

Burton was also important in swinging Ramsey's decision away from Old Trafford and towards north London. "Manchester United were in, just after we had played in the Cup final. I said to Aaron: 'I don't know what is going to happen, but if you get the chance, ­consider Arsenal because of the way they play and the way you play.'"

Burton is sure there will be no resentment from Cardiff's vociferous fans this afternoon and says they are all very proud of him and how he is pushing on. It is easy to detect the improvements that come from working with, and against, faster technicians. "It is not very often that young players move up and get straight into the team," Burton says, smiling. "He did that at Cardiff and again with ­Arsenal. He'll be thinking the game is easy."

Not quite. Even though Wenger describes Ramsey, who was 18 on Boxing Day, as "ahead of schedule", he still has to take on board some valuable lessons. While he has caught the eye with some of his cameo appearances this season, a splendid first goal in the Champions League at Fenerbahce being the best example, on other occasions he has been guilty of preferring the flash over the safe option in the closing stages of nervily tight games. Nobody doubts that he will soon learn.

At the rate he is progressing, his home town of Caerphilly will soon no longer be famous just for producing cheese and Tommy Cooper.

As we all know, this unique British talent sadly got his leg broken and is still yet to play in the 2010/2011 season.

After such a major injury it's almost meaningless to discuss further what was before. Since after it who knows if things will be the same. But compared to my initial impressions of Ramsey, he did the more I saw him look more like a dynamic attacking midfielder than a deeper ball distributor. Even if both things, very positively, looked to be in his arsenal.