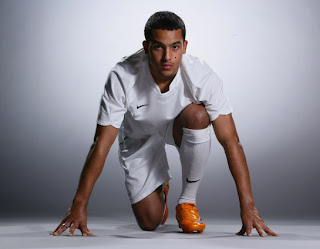 Like Ramos, Walcott is another player who had a rollercoaster ride up and down the positions of this list.

At 20 he is a player who definitely can still improve in a lot of areas.

Actually in a lot of those areas he might be one of the worst players on the list! However as everyone knows he has that great gift of speed and in the end I just didn't feel comfortable leaving someone so elite in that important difference-making area off the list.

I think it's clear that when he has space available to him he is right up there in effectiveness with players ranked much higher.

With injury problems lately (and that counts against him too), a very good indication of exactly how good he is just now, will be to what extent he gets a run in Arsenal's new 4-3-3 this season and how well he performs. Will be interesting to watch!

For most of the 2009/2010 season Walcott looked like a player who shouldn't have been on the list.

There were, and still are, just too many general fundamentals missing in his game.

Even with his weak-points mostly looking intact, the 2010/2011 season did start very bright for Walcott and I have no doubt that, even if almost nothing else, if true goalscoring ability is the ingredient that has been added to his blinding speed (and it should!) then he
belongs on the list.
Indsendt af Stefan kl. 21.59