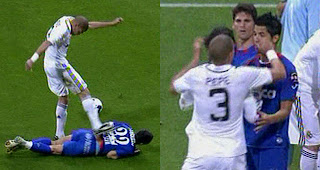 Even moreso than Mexes earlier Pepe is incredibly naturally gifted.

Whatever the sum may be of his great athleticism and excellent technical ability, it's probably higher than for any other central defender on the list, or out there anywhere, I think quite similar to the young Lucio, so despite all the well known flaws, some seen on the picture above, leaving him off the list entirely I just didn't think was the correct choice.

Yeah he is a total nutcase and in the midst of any run of good form, sometimes looking dominant, he is capable of both defensive and epic mental breakdowns.

Hopefully he'll get his act together eventually. Based on talent alone he really should be up there with the very best central defenders.

Other than proving he can also be a capable holding midfielder, which given his gifts isn't all that surprising, I haven't that much to add here.

Real Madrid under Mourinho definitely looks better defensively, the immense talent so many places on the pitch doesn't hurt, and (inevitably) it will likely result in a ranking boost for Pepe who was probably ranked too low in the first place.

Most interesting perhaps is seeing what impact playing alongside countryman Carvalho will have on Pepe.

Carvalho has exactly the kind of natural defensive instincts that Pepe despite his athletic and technical gifts sometimes lack.

Maybe Pepe can pick something up and eventually take the next step?