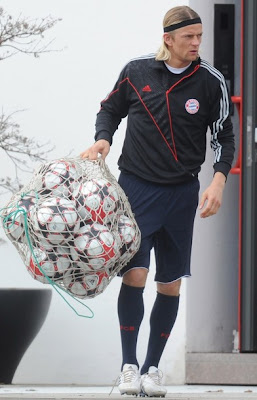 Tymoshchuk is someone who would have been quite a bit higher not too long ago but it might have been under false pretenses.

Here was a player when you saw him in Europe for Zenit or for Ukraine that looked really impressive with exactly the kind of controlling presence, physical and technical, that you'd want to see from a holding midfielder. Including what looked like some strong leadership as well.

Now enter his big switch to Bayern this season, and with all eyes on Tymo it's been a lot less smooth sailing.
For starters the passing hasn't quite been on a high enough level.
Like with Mikel at Chelsea, here just not quick enough, or correct enough if you will, to really make Van Gaal's system GO.

In other areas he doesn't look comfortable either and when I've seen Bayern he's been caught out of position defensively too.
Maybe too much is asked of him. Or maybe he just isn't good enough in another role than the very well defined one, that he must have known inside out, playing years in Russia and Ukraine.
He has of course played under another Dutch coach before, Dirk Advocaat, at Zenit, but the players and their characteristics, surrounding him now is certainly completely different than what he saw there and for Shaktar.

At first glance now, much more than before he has to complement excellent wings, their attacking as well as their (lack of) defending, while previously he has been one of several strong players running the show, both ways, more down the middle.

I don't want to make his individual struggles worse than they are but it's without a doubt disappointing that his performances with very good players around him has actually been worse than what we've previously seen from him, and in a worst case scenario it could be the first signs of a player maybe more limited and one dimensional than Bayern thought they were getting.

Still his success and impressive displays at an important position for many years now still suggest otherwise and earns him a spot on the list.

The struggles continued for Tymo in the 2009/2010 season and him eventually getting definitively replaced in central midfield with Sebastian Schweinsteiger, a newcomer at that position, proved to be a key moment in Bayern's impressive season.

Here was someone with the range of passing that could really take Bayern's style under Van Gaal to the next level. Not least complement the wingers.

This season though, injuries and poor form, has meant Tymoshchuk has found his way back into the Bayern lineup.

And even if it's other people's bad play or just the much lower expectations concerning everything that has to do with Tymo this time around, making his play look not that bad at all. Including in central defense where teammate Demichellis has been a disaster. It could still be enough for a place in the list.
Indsendt af Stefan kl. 21.44