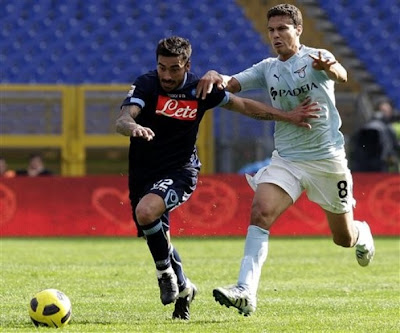 A notoriously inconsistent performer, Lavezzi has unique acceleration going for him. In fact I think it's safe to say that with the ball at his feet he must be a candidate for the fastest player around.
That of course also tells you something about his very good control and great balance. His "Tevez like" stockiness and low center of gravity helps too. Though not as strong or hardworking as Tevez he is definitely faster.

The downside is that it just seems like he doesn't get enough out of those qualities and therefore at times isn't all that effective and helpful to his team.

He doesn't consistently make good or even right decisions. In fact he often picks the worst solutions and his passing skills aren't that good either. And rarely good enough to create. That could easily have a lot to do with bad decision making of course but either way at the moment it just isn't good enough.

Then there is his questionable stamina and/or fitness. If Napoli really do fulfill their ambitions of European football, could Lavezzi even make good contributions twice a week?

His skills on the ball are so unique that he still makes the list but he needs to improve in other areas in my view to have any chance of climbing to somewhere much higher on the list, where I'm sure a lot of people, overly impressed by his skills, would feel he should be placed.

I mainly put it down to a much better work-rate which has really helped his consistency.

Mentally things can still go wrong with bad decision-making not least, but the right attitude is definitely there now and he is willing to put in the needed work.
Indsendt af Stefan kl. 00.38