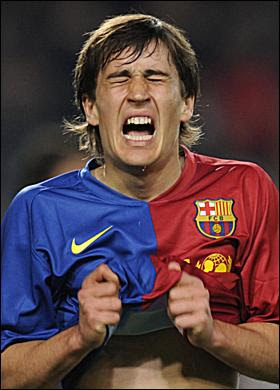 Bojan is someone who has been surrounded by a lot of hype since pretty much day one of his adulthood but this season so far has been slow for him and he finds himself fighting for playing time.

It could be argued that even last season was a personal disappointment. But then again expectations of course were very high. Bojan just has those glimpses of great pace and extraordinary dribbling skills that make people expect the world of him.
And that he in stature and style (even if falsely) reminds people of his teammate Messi doesn't help lowering expectations either.

Physically is where the obvious improvements can be made. Bojan is a very skilled finisher (over the years he has nettet 500 goals for various Barca youth teams) but needs better off the ball work so he can find himself in better positions more often (when playing with the big boys). Especially when we're talking centrally in the final third.
He is much better coming from the wing where he can use his acceleration into actual space but then another physical problem presents itself in that he can't defend very well and that rivals like Henry, Iniesta, Messi and now Pedro are more able to put effective pressure on the opponent ballholder whenever the possession is lost. Vital for Guardiola's Barcelona.

One year later and Bojan finds himself in danger of becoming the Barcelona version of Javier Portillo.

Okay that's a little harsh perhaps since he has been seeing many more games than Portillo ever did at Real Madrid. But there is at least a danger I think.

As touched upon in the orginal writeup Bojan still hasn't mastered those off the ball aspects of the Barca wide-forward role and looks to be only the fourth choice on the left.

Central where he can be a natural goalscorer is yet another place on the pitch now fully conquered by Messi and just like on the left, there is also star signing David Villa to compete with.

So far this season Bojan has only started a couple of Copa Del Rey games and his one start in the league was a disappointing draw at home to Mallorca.

My feeling still is that he is a good striker (still very young too!), better than Portillo was who after Madrid flopped everywhere he went, but just how good, we won't know until he starts regularly somewhere.

The latest I've heard is that his agent has ruled out a winter move but that they're unsure what will happen beyond that.

Personally I would really like to see what he could do somewhere else.
Indsendt af Stefan kl. 05.56