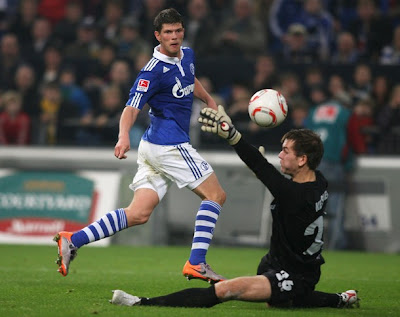 Currently having something of a nightmare season for his new club AC Milan which has hurt his ranking a lot.

How much of it is his own fault though I'm not really sure. At the moment Milan is playing with three forwards where one of them, Ronaldinho is pretty much immobile and then to have Huntelaar in there too who does almost all his work exclusively in the box is a bit too much of a balance destroyer and would expose the very thinly occupied midfield behind even further than what's going on at the moment.

Marco Borriello who plays instead of Huntelaar and enjoying something of a resurrection this year, after his own struggles settling at Milan last season, isn't as impressive as Huntelaar can be in the box or as dangerous, but he is good at that too and more versatile when it comes to other things. And he is mobile and has some pace which the Milan lineup desperately needs.

So as long as that system is rewarded with results and Borriello as well as Ronaldinho shows reasonable form it's going to be tough for Huntelaar to establish himself in the lineup.

But all those things are far from given and I'm pretty confident that alone up front with more midfielders behind him or in a partnership with basically any of the other Milan forwards that Huntelaar's striker qualities would come through and he would be scoring a decent amount of goals in Serie A too.

Not surprisingly all he needed was playing time. Preferably in a more attacking league than Serie A and the goals would come.

Look for that to continue and Huntelaar is definitely one of the favorites for top torjäger in the Bundesliga this season. He is too good of a goalscorer not to be.

Adding to the original writeup I also think, and it was already showing at Milan, that his game outside the box has improved. He is not as one dimensional as he sometimes looked, when he first showed up at Real Madrid.
Indsendt af Stefan kl. 05.45