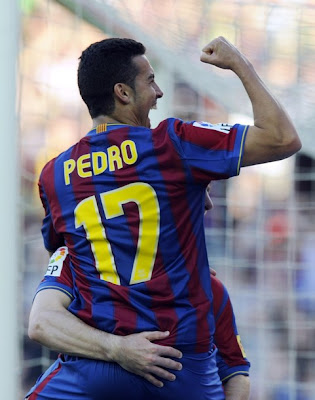 Pedro is a skilled attacking player who can make effective runs so that the Barca playmakers can find him and then when he gets the ball he has excellent control.

He is comfortable on either wing and he seems superior to Bojan when it comes to such things as general effectiveness in the area, especially centrally and not least in Guardiola's all important systematic immediate pressure on the opposition ball-holder whenever possession's been lost.

Spain manager del Bosque has declared him a serious candidate for the World Cup and considering the absurd amount of talent he is up against at his position that's a serious endorsement of the kind of talent that he has been displaying this season.
The kind of talent that in just a few months could make this list look rather silly by not having been included!

Yesterday when he scored one of the goals in Barcelona's World Club Championship win over Estudiantes he even set the curious record of being the first player to score in six different competitions in a single season following strikes in the European Super Cup, La Liga, Copa del Rey, the Champions League and the Spanish Super Cup...

The rise of Pedro continued throughout 2009/10 and he makes a giant leap up the list.

The only bad thing I can say about Pedro really isn't bad at all, but he is like the ultimate Barca modern day Spain specialist.

Everyone around him complements him superbly and he returns the favor and complements them almost to perfection.

His runs, work-rate, movement, finishing and ballcontrol are made for the Barca fluid short passing game with high degrees of team work.

Was he to spent considerable time not in the opponent half or be a more typical winger expected to get to the line trying to get crosses in, how good would he look? Does it even matter?

Pedro makes some of the best runs without the ball in the final third.

Over few meters in the final third he has the skill and acceleration also to be effective with the ball.

The finishing skills to be dangerous and defensively he is very good at applying the trademark Barcelona high pressure on the ball-holder.

I think he is excellent though and the only danger sign for his ranking would be if the Iniesta-Villa-Messa trio suddenly were to get all the starts up front.

Iniesta is better in midfield though, Messi as superb central as he is on the right and yeah Pedro in his own right, expert enough in my opinion, to help make Barcelona better when it's instead: Villa-Messi-Pedro.
Indsendt af Stefan kl. 06.36