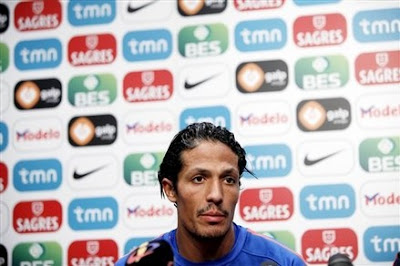 To be honest I don't see all that much of Bruno Alves.

FC Porto isn't on tv a lot here with the exceptions being when they occasionally play a European giant in the Champions League group stage or of course when they've qualified for the knockout stages.

I saw more of him this year for Portugal though (they were in Denmark's qualifying group) where manager Carlos Queiroz started playing Pepe as a defensive midfielder which made room for Alves to play alongside Carvalho in the central defense.

Alves had started playing there already alongside Pepe filling in for Carvalho when he had been out injured and I guess did so well that he kept the spot when Carvalho eventually came back.

The Carvalho/Pepe partnership had already suffered an early very unfortunate 2-3 disaster home against Denmark and while following that they struggled mightily scoring goals, some of it I remember as bad luck, defensively for what its worth after Alves took his place in the central defense, they only allowed 2 more goals in the remaining 8 group games and went unbeaten.

So with that and Pepe's recent season ending injury it does look increasingly likely that it will be Bruno Alves we'll see in central defense for Portugal during the World Cup where they'll face Cote D'Ivoire and Brazil in the group of death.

For Porto where he is the captain he has been the defensive stalwart for years and is currently on 4 consecutive league titles.
He is athletic, strong in the air, a tough tackler and last season he won the Portuguese footballer of the year award!

Bruno Alves made a big money to Zenit and at the World Cup confirmed his reputation as a strong defender.

Wow he has since that been doing in Russia I'm not sure but Zenit did just reclaim the title there in convincing fashion.

They were unfortunate not to qualify for the Champions League in a couple of games they could easily have won against Auxerre.

Instead they'll be one of favorites for the Europa League (won their group easily) where we should see plenty of Alves too.
Indsendt af Stefan kl. 21.47