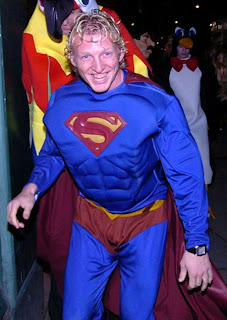 
And here is another player who has found himself in a very bad situation this season and the poor performances that tends go along with that.

Generally Kuyt is not very kindly looked upon by a lot of fans in the first place. What's the use of a forward who doesn't score goals anyway, right?

And then this season with his team really struggling and him obviously not being able to do anything even coming close to changing that, is something that surely hasn't done much to change all the negative opinions about him.

But what I like about Kuyt is his running and work rate. That he is very good without the ball basically all over the pitch. Whether that's defensive work like putting pressure on the opponents and/or defending his wing, or if it's offensively in the final third where his tireless running diagonal or deep, take your pick, presents teammates with a mobile target.
Then when he gets it (current Liverpool it's really much more a case of IF) he is capable with both head and feet to do good things.

Now I'm not claiming Kuyt is a good passer or anything like that but he has good enough ball-control to make sharp turns with the ball enabling him to get either shots on goal (FWIW like everyone else he DID score in abundance in Holland) or makable passes.

Mind you this is in the final third with the ball, because while Kuyt has a lot of value without the ball almost anywhere, with the ball he is pretty useless in most places (this is one area where someone like Rooney is so much better) and can actually be pretty destructive to quality possession if he keeps getting it in places he shouldn't.

Fortunately at his best with his great stamina he is able run himself into right positions without the ball and the right positions in the final third where can be constructive if he gets it or if he doesn't at least create space for the likes of Torres and Gerrard.

Unfortunately this season a lot of that work just seems wasted and in what I suspect is a damaging combination of Liverpool having lost Xabi Alonso, their one midfielder with a great range of passing, and having acquired an attacking right-back in Glen Johnson, it does seem like Kuyt more than ever is getting the ball where he just isn't any good.

Either because he finds himself somewhat further back cause the new fullback loves to come forward a lot, or because the two remaining central midfielders Lucas and Mascherano just doesn't have the deep pass, or any playmaking ability, in their arsenal but time and time again instead passes it short, often sideways, which is where we find Kuyt then, standing still, not making forwards runs and unable to do much positive at all.

And last and possibly least here is a random Dirk Kuyt fact:

He finished 2nd in the Actim Index last season behind Nicolas Anelka and ahead of Frank Lampard who was 3rd.

I think it's become apparent that Kuyt is an excellent player to have on a very good team. He'll make even that team even better with all his work without the ball. Both when it comes to attacking and defending. We've seen that under the best years during Benitez Liverpool reign and for his national team as well.

For a more ordinary team. Like Liverpool performance-wise currently. Kuyt will also look rather ordinary and I think for him to become really effective again Liverpool has to establish some kind of quality passing game. He is too much of a passenger at the moment when it comes to the attacking game under Hodgson.
Indsendt af Stefan kl. 21.44