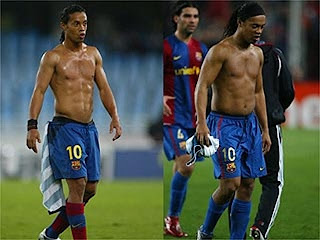 Not on the first,second or third version of this list but with some timely reminders lately of the incredible talent that's still there, the clown prince makes a late entry after all.

But first let's take a look at why he almost didn't make it.

While he is still a supremely skilled player he has been something of a team killer in recent years. Killer of his own teams that is.

Because of what I presume must be poor physical condition, cause he is still only 29 which is a decent football age, he just doesn't have any movement without the ball anymore.
That he doesn't work when his team isn't in possession is not anything new of course. That's never been his role in the first place. But when he never makes runs or has movement off the ball he is generally just too easy to mark.
Then when he 4 or 5 times a game he will make a run he will often be too out of breath to do anything effectively once he gets the ball.
Too often it has seemed like he wasn't able to keep up with the tempo at the highest level anymore, which when you think about it is pretty sad for a 29 year old who among millions of people is still one of the utmost talented this game.

Personally I'm convinced that a significant part of Barcelona's historic improvement from the last season under Rijkaard to first season under Guardiola was the black hole that had become Ronaldinho wherever he was on the pitch now being gone from the lineup.
His extreme case of non work simply limited the team in too many ways. With the ball he reduced the movement of the whole team and without it, for starters, something like effective pressure on opponent possession could never be very effective.

Even last season in what was his debut season for Milan it was when Ancelotti started benching him that results finally improved for Milan and they started a rapid climb up the table. Coincidence? I think not!

So why is this clown even on the list? Why is this season different?

It really isn't that much different from what I can tell. I still see many of the same negative things from him and him now being given a whole left-wing to occupy in a 4-3-3 by new Milan coach Leonardo, where he can then mostly stand still or sometimes go for walks, he still hurts his team's balance consistently throughout games.

But what can't be denied is that he is an extraordinary playmaker when he gets the ball out there.
He doesn't really have the energy/pace/whatever to dribble much anymore, but he'll make great passes that very few can even think of. Short, forward, long, diagonal or cross, he'll do it all and with two other forwards to look for and a player like Seedorf coming from behind often ending up somewhere near him, he's been quite effective lately and he leads Serie A in assists. It's when Milan doesn't have the ball where the real trouble starts but with it and Ronaldinho, parked out on the wing, he has actually become value.

Leonardo seems to have just accepted that off the ball Ronaldinho just isn't good enough anymore in order to not be, a way too easy mark so to speak, so he has placed him so far out left field that he really is beyond normal marking unless you wanna man mark him for some reason.
For long periods of the game he is just out there almost glued to the sideline and yeah most players wouldn't be able do much of anything from out there especially not when they're slow and not much of a threat to cut well inside, but Ronaldinho he'll somehow make things happen from out there.
Say one great first touch, follow it up with some genius pass and the man (the clown) has created a dangerous situation, and that without much effort at all.

He is too skilled not to be on the list :(

The only thing changing is his playing time and his team's fortunes with it.

Currently he is back to being benched and in the meantime a 4-3-1-2 Ronaldinho-less AC Milan has gone top of Serie A.

Don't count him out just yet though. Every little nice thing he does is blown out of "HE IS BACK proportion" and he also happens to be Silvio's favorite player to watch.

Then there is the injury situation at Milan resulting in an often tired looking (but still carrying the team on his back) Ibrahimovic being the only striker. That cold also open the door for Ronaldinho in some kind of striker-less but talent-rich combination with fellow Brazilian Robinho.
Indsendt af Stefan kl. 07.00