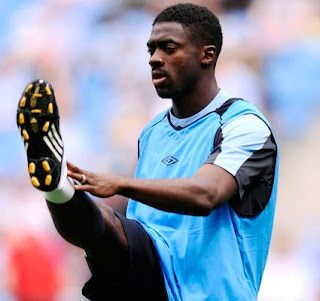 Kolo Toure is someone who in his career has been called everything from terrible to excellent.

All the while during that I've always thought he was very good, but certainly at times last season doubts crept in while at times watching what looked like a quite shaky Arsenal defense.

However like I talked about in the introduction to this list I do believe such things very easily can have to do with the overall defensive balance of the team, which for Arsenal last year lead by central midfielders with some way to go still, certainly wasn't great.

In previous seasons even when still inexperienced at what was a new position, on more balanced teams, Toure has looked just great though, with the prime example being Arsenal's incredible unbeaten 03-04 title winning season where he was a key player in defense on a very well balanced team.
Another example was Arsenal's 2006 Champions League run where they reached the final and along the way managed an impressive 10 consecutive clean sheets.
It's special times like those when central defenders receive a lot of praise and Toure was no exception, getting recognition as one of the best in the world at his position.

Since then those kind of words and Kolo Toure in the same sentence have been much more rare.

I think he is basically the same player though. Maybe even slightly stronger now than then and of course more experienced.
He still has great athletic ability. Can win headers and save his team with great tackles.

And with secure ball control, he can still make those impressive runs forward.

He may be stronger but he is also slower. Other than that not much to add. He is a good player still but also one that will never make up the central defender edge some other top teams have over Manchester City.

He is on the down but at least for City his partner in central defense, Vincent Kompany has improved a lot recently.
Indsendt af Stefan kl. 23.10