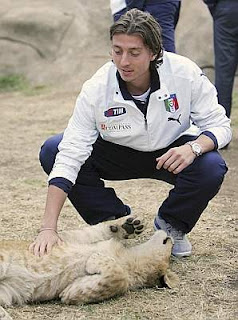 Montolivo was difficult to place. In some ways his performances when playing at the highest level for quite a few years now have been rather disappointing. That includes when given the chance for the national team and when asked to play a leading role for Fiorentina in Europe.

On the other hand he is such a complete player that a place among the 200 best would seem rather obvious.
He is a good technical player with a very nice range of passing and he has good ball control too.
He also works hard and defends well.

Still if it had not been for some very good performances this year, in Europe too, the disappointments of previous years, despite all that nice completeness , would have kept him off the list.

With a reputation of being a complete enigma, my theory is just that Montolivo early was asked to do too much. Not that I really blame the club for asking a lot from someone, for some years, seen as their best player. Who else would they ask?
But Montolivo consistently just wasn't able to be an attacking midfielder, with serious playmaker duties, as well as carry his weight defensively. At times it was just too much I think and Montolivo had some collapsing performances where he basically failed on all fronts. He didn't contribute well to attack, awful sometimes in fact, and he wasn't able to carry out his defensive duties either.

This season I'm more seeing a Montolivo with some much simpler tasks and it has really helped his performances.
The emergence of talented players in front of him like Vargas (moving him further forward has been a great move) and of course Jovetic, plus the clever signing of Marchionni, has relieved him of a lot of attacking duties.

He doesn't have to always be the one trying to make something happen anymore. With attempted passes or runs.
Now a lot of the time he can just concentrate on more simple distribution to the people around him and they too can make something happen. In fact they're more likely to!

As a result we're now seeing Montolivo less often in the final third where he has struggled with less space. Because Fiorentina now have players who can do great things even there. In the tightest of spots.
Montolivo then from further back can start counter attacks or seek out people with a deep ball, under not so much pressure and much more comfortable. OR just do something simple.
He isn't the best attacking player anymore and he isn't forced to pretend that he is.

This has of course also done wonders for his defensive performances where it's been a lot easier to maintain good position when not having to play catch up from failed attacking duties.

Could it be argued then that Montolivo really has made the list cause of great teammates who've made him look better?

I think that had he done very well with his previous huge responsibility that it would have been something worthy of a much higher placing. But he just isn't that good.
I do think however that in this current role that he is showing enough good things to earn a spot around this mark.
WITH a chance to get higher if it continues. He is better technically than some players still to come and pretty good defensively too, a little worse than some. A little better than others!

Somewhat unusually for an Italian footballer, Montolivo has publicly stated he is an atheist.

2009/2010 continued with good central midfield performances from Montolivo. I will still say he could really use a more physical presence with him, one who can play a little too, for Fiorentina since the departure of Melo it has usually been one extreme or the other, but you can't take Montolivo's completeness as a player away from him. Just wish he was less enigmatic and perhaps mentally stronger during the tough times.

The tough times were exactly what happened in the beginning of the 2010/2011 season and Montolivo, I'm now afraid predictably, sunk very low along with everyone else (lower actually since he is much better than most on the team) playing way below his best.